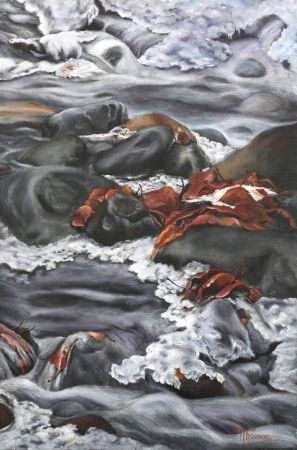 Teresa Thomas lives in Smithers, having spent her childhood in the Lakes District. The last two decades have found her assisting in the operation of placer mining in remote northern areas during the summer months then enjoying the warmth of Kailua-Kona during the winter where the sub-tropical climate of the big island is ideally suited to her love of an outdoor lifestyle. Her time there is ﬁlled with ﬁshing excursions, beach-side yoga routines and in 2010 started oil painting classes with Edwin Kayton, a local artist who offers occasional workshops. “I have wanted to paint since early childhood but had no idea where to start.” With Kayton’s patient instruction and support from fellow students the completion of her ﬁrst painting – a realistic portrait of a family member – produced an overwhelming amount of emotion as the subject’s personality emerged with so many memories, pulling the past into the present. Since she has broadened her subjects to include local landscapes, ﬂorals and animal portraits.