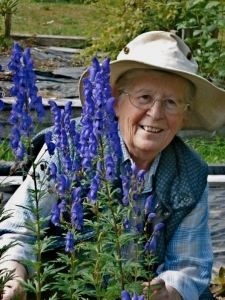 I am mainly self- taught and I fell in love with painting when I was 16.  Also, painting is in my blood, particularly on my father’s side.  It began with my Great-grandfather, who left us a watercolour of a lady standing under Bolten Abbey in England.  Then, my Grandfather Sands moved his family to Victoria Canada. My father was the 2nd eldest.  Grandfather loved to paint houses and the old-time schooners.  After all, he had made his money in the silk trade, before he came to Kelowna B. C.

Later, Father won several silver spoons and Honourable Mentions with his charcoals in the PNE in Vancouver.  Also, he was considered one of the best poets on Vancouver Island, his works now at the University of Victoria B. C.  I, too, have written much unpublished poetry.  And recently, my brother, Hank Sands, has written a book about flying jets and helicopters, called Wolf’s Moon.

After marriage and three children, I exhibited some murals in Dawson City Y. T.  The two murals were 4′ x 8′ and must have been something of a shock to the locals.  They were done in the style of hard-edge painting that was then popular in the U. S.

When the gold-dredges, which my husband worked on, shut down in the sixties, we moved to Terrace B. C.  By then, my preferred style was abstract expressionism and I was reading extensively about the French Impressionists and the Canadian Group of Seven, with a special love of Emily Carr’s painting and writing.  I was also aware of the popular artists in the U. S., especially Jackson Pollack and Georgia O’ Keefe.  I sold many abstracts over a two year period.  My target was to capture the wildness of the Canadian landscape — with a growing interest in Native Totems.

I’m sure some of the public were surprised by my subject material, such as opening a small door to look at a mirror with contraceptive pills pasted on it.  I sold six red sardine cans for $60.  That may have been the highest price ever paid for sardines!  My work has been purchased by collectors in Terrace, Kitimat, Vancouver, Cowichan Lake, Toronto, California, Nova Scotia, and even Holland.

My hobbies are fishing, gardening, bird watching, music, poetry, and the continued study of 19th and 20th Century painting, up to the present.         Now retired from several jobs, I am painting almost every day — anything from flowers in their natural setting, to wild animals, and then, hopefully, to people.  There is no end to subject material!         Lastly, I took a University course in Design Fundamentals in Kitimat — but always wished I could go to a proper Art School.                             By Sylvia (Sands) Johnson