Stan is from Kitselas Village, near Terrace, BC. He attended the Gitanmaax School of Northwest Coast Indian Art in 1979 and followed with an extensive apprenticeship under his uncle Dempsey Bob, who influenced his decision to become an artist. By 1987 Stan had contributed to many commissions, educational projects and ceremonies under the guidance of Dempsey Bob, and he began to concentrate on his own pieces. He has received numerous commissions, often in collaboration with his cousin Ken McNeil, including a totem pole for the University of British Columbia First Nations House of Learning; and a totem pole that represented Canada at Expo 92 in Seville, Spain (later raised at the Kitselas Cultural Centre).

Stan has been included in many exhibitions defining the future directions of woodcarving.

Stan Bevan, instructor with the Freda Diesing School of Northwest Coast Art (FDS) and master carver,  he helped oversee the development of the art for Waap Galts’ap. This building’s  four interior clan post sculptures, two exterior welcome poles and interior and exterior house paintings showcase the quality and progress of the School’s teaching and learning.

NOTE: Stan’s Carvings are by commission only. 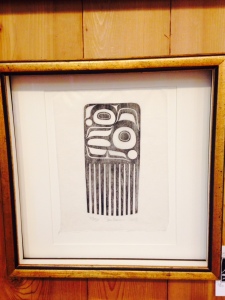